Angela asks herself: Who was my grand-grandfather? The question is – a couple generations later – hard to answer. But Angela can reconsruct, where he was in Second World War.

My great-grandfather took part in the invasion of Russia as a doctor. He died in Tarnopol in 1944. These are facts that I have known for a number of years, but for many years I didn’t understand what they actually meant.

I only started thinking about Gert Krösch’s (my great-grandfather) involvement in World War II about a year ago. We still have some of his service records including his military service book which records in detail where he was stationed and which military missions he took part in. In the space of a few weeks he crossed the whole Ukraine. As of May 1943 he was again stationed in the Ukraine. There are also documents with detailed place names from this time.

I started looking for these places on the Internet and creating a map to get an overview. I tried to find out what was happening at those places while my great-grandfather was there. Some of the are shocking: The Wehrmacht murdered around 1,5 Million Jews and 3 Million Ukrainians during the Russian campaign – a campaingn, whose declared aim was the murder of all Jews and the brutal conquest of the ukrainian people.

An Iraqi Jew in War 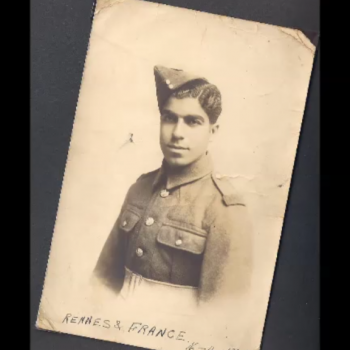